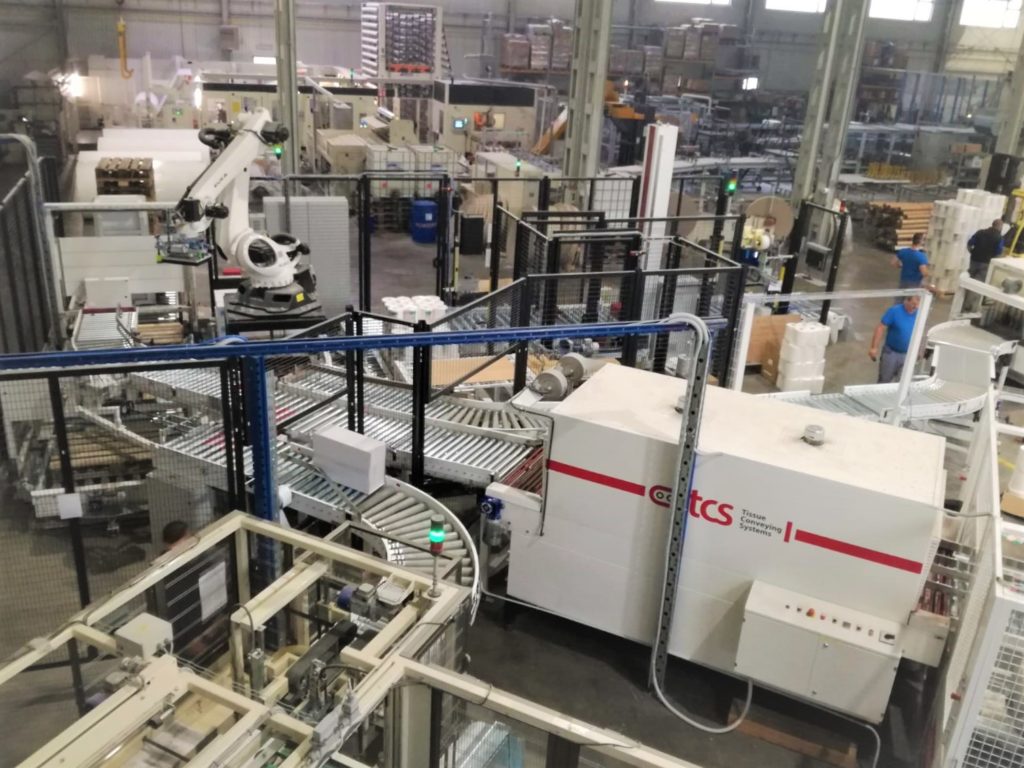 The robot stacks toilet paper bundles on the production line

This domestic company brings the future of toilet paper production: Not only have they thrown out the inner carton roll, but they will monitor consumption – with the application

The coronavirus pandemic only pushed them to develop another segment, the medical one. While the production of disposable protective masks started this spring, Zagreb’s Delt Papir, recognizable by its paper, toilet paper and paper towels and napkins from the Ola’la brand, has modernized the production line of its export brand Tubeless, a project worth a total of HRK 28 million. With it, they entered the final development phase of an application that will be able to control the consumption of, for example, toilet paper in toilets.

In the midst of the pandemic, the Zagreb entrepreneurial duo Alen Krajačić and Krunoslav Kišak, co-owners of Delt Papir, decided to bite into a new production segment – the medical one. They invested one million kuna and this spring started the production of disposable protective surgical masks, which they sold even before they produced the first ones.

‘We produce 85,000 masks in two shifts daily on two production lines. Some of them end up on the domestic market, and some in exports’, say Krajačić and Kišak, co-owners of the company Delt Papir for tportal.

While sales were, as they say, in the ‘expected dimensions’ during the summer, the number of inquiries jumped significantly in September. They are currently meeting the demands of the market, but they are also ready to take a new step forward if the need arises.

‘Production is automated, we work in two shifts and we cover all order needs. If there is a need for the introduction of the third shift, we will certainly increase the staff in that segment’

-say the co-owners whose company exports its products to 26 countries around the world, and last year earned HRK 130 million.

By the end of September, Delt Papir plans to complete the modernization and put into operation a new production line of its export trump card, the Tubeless brand. It is a project worth a total of HRK 28.26 million, while 7.8 comes from the European Regional Development Fund. It will be possible to produce 6,000 tons of toilet paper annually.

‘Tubeless is a brand of professional paper products, specific because they do not have an inner carton roll. This eliminates tons of paper waste. It is a product created according to the EU Ecolabel certificate from raw materials from renewable sources. All paper scraps and surpluses that occur during production are collected, recycled and reused as recycled raw materials’, explains Kišak.

Each roll of Tubeless toilet paper, as they explain, is fully usable, and contains 40 percent more paper of the highest quality. It is intended for a wide market of public toilets, such as cafes, restaurants, shopping malls, airports, or toilets in which a large number of users fluctuate, all the way to smaller, boutique public toilets. “Tubeless combines paper products, dispensers in two lines, Ice Blue and Executive Black, for a refined look of a public toilet, but it is also available with smart remote control technology,” adds Krajačić.

In Delt Papir, they have developed an application that will be able to control the condition of toilets.

‘Those who maintain and care for toilets on a mobile phone or computer will receive a notification of what is missing and needs to be replaced. It will be easier for companies that manage people to maintain such facilities because they will be able to check, for example, how much toilet paper is used in a certain place ‘, Krajačić says for tportal.

He notes that, for example, in toilets where there is a large fluctuation of people, such as those at large airports, sensors on the holders will report via the app how many people entered them and will then need to visit, clean and replenish what has been spent.

More than 80 percent of the brand’s production ends up in overseas markets. It is mostly exported to European countries, but also to the Middle East.

‘So far, Tubeless has accounted for 89 percent of total exports. We believe that in the coming years we will multiply the exported quantities’, expect Kišak and Krajačić.

The article from tportal.